I just love the Robocup Rescue competition. Of the three Robocup disciplines (Dance, Resce and Soccer) it's my favorite by a long shot.

Rescue starts out easy enough and the first stages can be completed by a year five or six student with just a little support from their mentor.

The Robocup Rescue competition describes a scenario where there has been a terrible chemical spill, and a victim is trapped on the top of a chemical tank. The environment is dangerous and rescue can only be made by an autonomous robot and it's our job to build that robot.
Getting Started with Lego Mindstorms & NXC 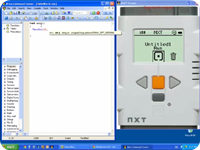 The Brick Command Center is an Integrated Development Environment (or IDE for short) for programming robots including the Lego Mindstorms NXT using text based languages such as the language 'Not Exactly C' or NXC.

In computer programming, we talk about the floor and the ceiling of a language.

The floor describes the amount of learning you must do before you can write something useful.

The ceiling describes the complexity of the program you can write before you hit the limits of the language.

The graphical programming tool that comes with the Mindstorms NXT kits, NXT-G has a low floor (it's easy to get started) but a low ceiling (there are limits on what can be achieved with the language.)

Not Exactly C (or NXC for short) is much harder to learn than NXT-G, but once the basics have been mastered, there are fewer limits on what can be achieved.

This serious of talk-throughs will teach you the basics of programming the Lego Mindstorms NXT using NXC and the Brick Command Center.

Be warned - this is hard, but once mastered you will enjoy the power of the language.
Robocup Rescue with Lego Mindstorms & EV3

A single talk-through that explains the Club Engineer line following and turn hint algorithm as implemented with EV3.
Data Driven Calibration with NXT

A good line following robot will be calibrated at the start of each line following run, however this can become tedious if calibration values have to be manually measured, calculated, then compiled into the robot's code.

This series of talk-throughs show how to build a data driven calibration system for a NXT line following robot.Note: This is an advanced concept.

Getting Started with Lego Mindstorms

If you are new to robotics, this is the place to start. We cover some concepts that are common across all computer programming languages using the graphical NXT-G language that comes with the Lego robotics kits. At the end of this course, the tech-savvy student will have learnt how to program a robot to control motors and respond to its environment using distance, sound and light sensors.

Write your own Pong game with Pascal

Playing computer games is OK, but writing your own game to play, then distributing it to your friends is so much more fun.

Pascal is available as both free and commercial tools and different version have been used in amazing systems for decades, for example, Skype was originally written in Pascal.

In this course we learn the basics of programming using a commercial language by writing a simple game. This languages is tough - but once mastered, there is little limit to what can be achieved.